Skip to Search Skip to Navigation Skip to Main Content Skip to Footer
Item request has been placed! ×
Item request cannot be made. ×

The color of law : a forgotten history of how our government segregated America / Richard Rothstein. 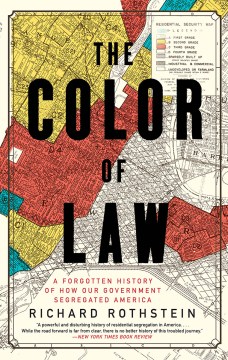 Recent demonstrations in cities across America against the murder of African Americans by police returned the question of segregation in housing to the fore. While the term de facto segregation is often used to assert that this is the result of private decisions or personal acts of discrimination, Rothstein argues that the real history of segregation is primarily that of explicit or de jure government policy, with personal actions secondary. From wartime public housing to the FHA refusing to insure mortgages for African Americans and many cases in between, government policy at all levels violated the Reconstruction-era constitutional amendments mandating equal protections. Ghettos were deliberately created by official policy. Rothstein provides plenty of evidence to support each example, including interviews, court cases, law codes, and newspapers, along with secondary sources on each aspect of government discrimination. There is an extensive FAQ section for further discussion. This is essential reading for anyone interested in social justice, poverty, American history, and race relations, and its narrative nonfiction style will also draw general readers. This is a timely work that should find a place in the current national discussion. Copyright 2017 Booklist Reviews.

Conventional narratives about segregation in 21st-century America hold that persistent racial disparities are a product of de facto segregation—the summation of individual preferences—rather than de jure segregation enforced (unconstitutionally) by law. Legal scholar Rothstein (NAACP Legal Defense Fund; Univ. of Calif., Berkeley) disabuses us of this "too-comfortable notion" that the state has not incentivised, and in some cases explicitly required, discrimination against African Americans. Rather than being an accident of privately held prejudice, Rothstein's work argues that segregation across the long 20th century was a product of federal, state, and local housing and land-use policies that directly and intentionally led to the suppression of black family wealth and well-being. To support his argument, he draws on extensive historical research that documents government efforts to create and enforce segregation. Each chapter focuses on a particular tactic such as public housing, racial covenants, or state-sanctioned violence. The final section calls on citizens to accept collective responsibility and remedy state wrongs through public policy. This indictment of government-sponsored segregation is a timely work that will find broad readership among those asking "How did we arrive here?" and "What next?"—Anna J. Clutterbuck-Cook, Massachusetts Historical Soc.

Rothstein's comprehensive and engrossing book reveals just how the U.S. arrived at the "systematic racial segregation we find in metropolitan areas today," focusing in particular on the role of government. While remaining cognizant of recent changes in legislation and implementation, Rothstein is keenly alert to the continuing effects of past practices. He leads the reader through Jim Crow laws, sundown towns, restrictive covenants, blockbusting, law enforcement complicity, and subprime loans. The book touches on the Federal Housing Administration and the creation of public housing projects, explaining how these were transformed into a "warehousing system for the poor." Rothstein also notes the impact of Woodrow Wilson's racist hiring policies, the New Deal–era Fair Labor Standards that excluded "industries in which African Americans predominated, like agriculture," and the exclusion of African-American workers from the construction trades, making clear how directly government contributed to segregation in labor. And Rothstein shows exactly why a simplistic North/South polarization lacks substance, using copious examples from both regions. This compassionate and scholarly diagnosis of past policies and prescription for our current racial maladies shines a bright light on some shadowy spaces. 13 illus.